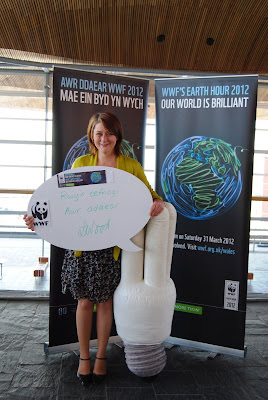 Since then the event, which is organised by WWF, has gone from strength-to-strength with a record 138 countries taking part involving hundreds of millions of people last year. Hopefully 2012 will see more records broken for participation.

It's great to see that Ysgol Evan James in Pontypridd will this year lead the switch off in the UK for Earth Hour after winning a competition. Pupils from the school will take part in a candle-lit walk through Pontypridd town during Earth Hour which begins at 8.30pm.

The Earth Hour concept is worth backing and I hope it gets support in 2012 like never before. Our environmental problems are not going to be solved by just one hour of reduced power consumption. However, the more people switching off the stronger the message delivered to the powers-that-be that people want to see stringent action on climate change.

So please do this tiny bit for our planet by supporting Earth Hour at 8.30pm this Saturday.